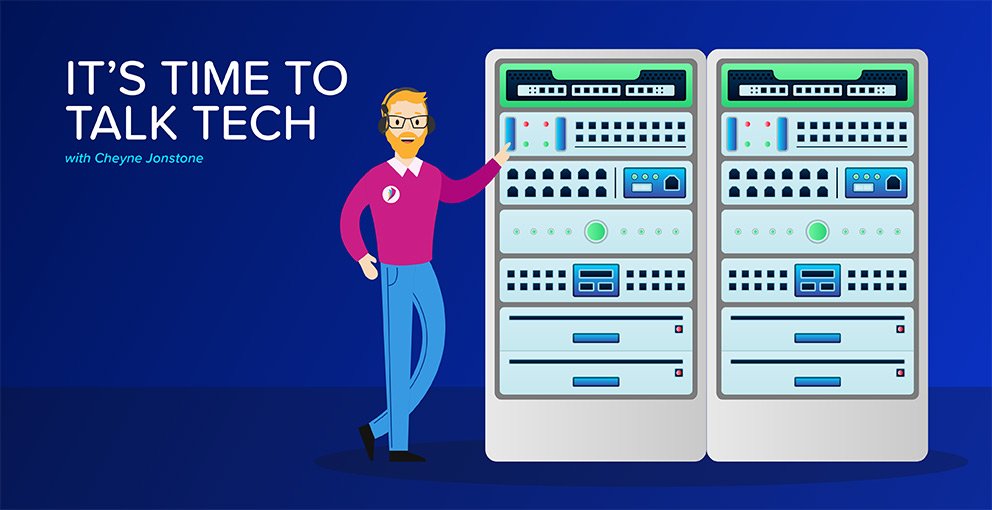 It's time to talk tech!

So… you wanna talk tech? Let’s do this!

Most people don’t know it, but there is a lot that goes into hosting a website and making sure that it’s online and available to your customers, so we’re going to try and break it down in laymans terms and give you a better understanding of how it all works.

Get yourself a beverage, put your reading glasses on (if you wear them), and let’s get stuck in to this.

Let’s start with where all of the equipment lives – the data centre. What you see in movies and television shows with all the blinking lights is somewhat true, only it’s a lot louder then what they make it out to be.

Now it might sound like a fancy high-tech name, but essentially a data centre is a secure building that houses equipment that powers online services. There are thousands of data centres all over the world, big and small, but they’re not all equal.

We use data centres in Sydney and Melbourne that are designed, built and operated by publicly listed company NEXTDC (ASX:NXT). They operate the largest network of data centres across Australia with eleven facilities in five different states, housing data for government departments, large enterprises and service providers like us.

As one of the founding customers of NEXTDC, we were fortunate enough to be able to put forward our ideas, suggestions and concerns to NEXTDC founder and tech entrepreneur Bevan Slattery in 2010.

Some interesting facts about NEXTDC:

Ever been inside a data centre? If you said no, don’t feel bad because most people haven’t – and there’s a good reason for that. Data centres, by design, are secure facilities where only those with access are permitted to enter.

NEXTDC data centres have 24/7 onsite security operations who monitor the facility through motion sensitive CCTV cameras, and visitors are required to enter through bullet-proof airlocks that can only be opened by using an encrypted access card that is then reconfirmed with biometric fingerprint readers.
Given the important information that is stored and accessed in a data centre, most are designed with redundancy at the forefront. The most critical area of redundancy is power – because without power, nothing is going to work and customers will go offline.

This is why a lot of money is spent engineering data centres to have fully redundant power systems that include:

And the three other critical elements of a data centre – heat, cooling and fire.

Everybody knows that heat and computer equipment go together like oil and water, which is why every effort is made to keep data centres cool. This usually involves heat containment and extraction systems that help circulate the air and prevent equipment from overheating.

All data centres have special air conditioning units that provide a flow of cool air for equipment to ingest, which helps keep it running at the optimum temperature as well as maintaining and controlling air humidity.

Should a fire break out anywhere in the facility, fire suppression systems should detect and be activated. Some older facilities still use water or foam-based systems which are obviously bad news for electrical equipment, but more modern facilities like NEXTDC use Inert gas suppression that essentially removes oxygen from the air and stops any fire in its tracks.

Once inside the data centre itself, most equipment is housed in secure steel “racks” that are specifically designed to hold specialised equipment in a way that keeps air flowing from front to back and without leaking hot air in front of the cold air intake.

Every rack is secured with a locking mechanism that can only be opened by people who are supposed to have access to it. Traditionally, physical key locks are used, but NEXTDC uses access card readers to electronically open each rack.

So what’s inside the racks? Glad you asked!

Our network is one of the most important elements of the web hosting environment, and is designed to be completely redundant with multiples of everything that has given us 100% network uptime over the past twelve months.

The other great thing about our network is that it is built for scalability, and currently only operates at around 22% average capacity. That means there is plenty of room for growth, and guarantees a super-fast connection to your website.

To make things as easy to understand as possible we will break this section up into four main parts – providers, routers, firewalls and switches.

Providers
When we talk about network providers, we are talking about companies who provide access to the internet and private networks known as peering providers.

These peering networks allow providers like ourselves to pass traffic to other providers at a much lower cost than going over IP transit.

In both Sydney and Melbourne, we have 10Gbit connections to the following providers:

To guarantee uptime and reliability, we have two separate physical connections to each of these providers that follow a different fibre optic path to the data centre, and we maintain a link between our Sydney and Melbourne networks that allows each location to act as a second backup (or a backup-backup?) if required.

All of these connections to providers terminate at our routers.

Routers
You can think about routers like a round-a-bout that has signs showing which exit you need to take to get to a specific location.

But before any traffic gets to our routers it must first pass inspection by our Corero distributed denial of service (DDoS) appliances that check every packet to ensure that it is legitimate and not an attack. If it is an attack, the Corero system will drop the offending packet like an X Factor winner from a record label, which protects our network and your website from unexpected downtime.

And of course, each of our locations has two Brocade routers for complete redundancy.

Firewalls
In keeping with our modular design and standard operating environment (SOE), each of our racks has two next-generation Fortinet firewall appliances that inspect all network traffic that is destined for a server in that rack before it gets there.

Unlike the Corero DDoS appliances we mentioned earlier, these beauties are looking for hidden malware, known exploits, and malicious websites. But the brain of these beasts comes from its threat intelligence capability that is the AI-powered FortiGuard Labs security services, that constantly updates and deflects sophisticated attacks in real-time.

Switches
Once we’re pretty certain that we have clean traffic, we need to pass it along to the server. This is done through devices known as switches, that get their name from… well, switching traffic from one port to another.

Also known as the “purple packet eaters”, our Extreme Networks X670-G2 switches are a reliable workhorse that allows traffic to seamlessly switch to their ultimate destination.

And you guessed it… there’s two in every rack!

If you haven’t fallen asleep yet, we’re now at the final stop – the servers.

A server can really be any type of PC, though they’re not really designed for that purpose. Instead, there are purpose-built servers that are designed to fit nicely in racks, have multiple CPUs, way more memory, and faster hard drives, that are designed to be on and in-use 24/7.

We use two different manufacturers for our servers – Dell and HP Enterprise. In terms of quality and reliability, there is no real difference between the two, and it is more a commercial decision and what we put inside them that determines which one to use than anything else.

The servers are what we use to store the data for your website and run the services needed to display it to the world. They run a Linux operating system and have cPanel and many other software components installed that gives you all of the features you’ve come to expect from this type of service.

So now you know how we host your website, the question is… do we host yours? If you answered no, it’s time to make the switch! Why, we hear you ask? Let us tell you!

Head over to our cPanel web hosting page where you can sign up today and get your website moved to VentraIP Australia.