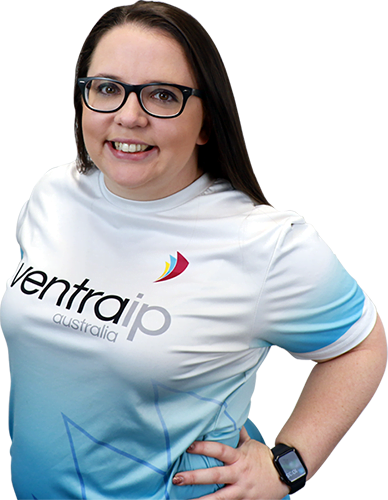 Can nap anywhere, any time

Spends her weekends at dog shows

Can find a Scrubs quote to suit any occasion

I’m part of our recently created Marketing Team. The four of us look after Marketing as a whole, and I focus specifically on social media, traditional media and PR, and content creation. I’m also the chief Ventrasaurus Rex guide, taking him on adventures throughout Melbourne city and to visit some of our customers.

Do you have any pets?

I have four; one cat and three dogs (although one of the dogs is technically my boyfriend’s). Lazarus Megacat Prime (cat) is 7 years old and I’ve had her since she was a kitten. I also have two Finnish Lapphunds (Maddi and Helvi) and one German Shepherd (Vega). Maddi is almost 9 years old, Helvi is just over 1 year old, and Vega is nearly 4 years old. They’re all the best dogs in the world.

Definitely to Finland. I’ve been there before and can’t wait to go back. It’s so magical in winter, especially up north in Lapland and the Arctic Circle. You can meet Santa (YES HE IS REAL) and see real-life reindeer, as well as view the Northern Lights. It’s the most amazing, surreal place in the world.

Have you ever met anyone famous, if so who was it and where?

I’m a bit of a music nerd and used to review live gigs for some online publications, so I’ve been to hundreds of gigs in my life and have been lucky enough to have a few drinks with a lot of the bands afterwards. The Living End are my favourite though, and I’ve hung out with them plenty of times – I have known them for years and actually run their official fan page on Facebook. They’re an awesome group of blokes.

Never having to think about making lunch ahead of time! Buying lunch used to be my biggest bad habit, and my biggest budget drain, so being able to order in the morning and have it ready for me at lunch time is honestly so convenient.

I’m also lucky enough to be able to bring my dogs into the office every now and then which is awesome – they love visiting everyone in the office and sniffing out the best snacks and treats in everyone’s desk drawers.